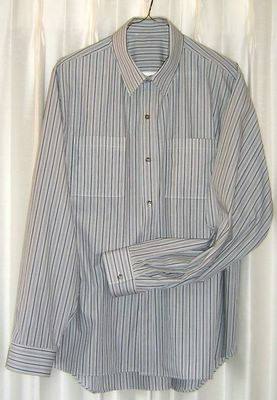 Here's the shirt I'm taking to the County and State Fairs this year. I finished it yesterday, along with a blue and white striped one. It's made from KwikSew 1627, which is unfortunately OOP.

After I finished the shirts, I realized I was supposed to go to a group called Sewciables that evening, and the project we were to do was a T-shirt, or anything out of a knit. Well, I have a lot of knits just waiting to be made into a nice Jalie #2005 Tee, and so I decided on a mauvey-pink rib knit cotton with dark mauve polka-dots from Wazoodle, and cut one out, along with an FFF skirt. I made the tee in about 1 1/4 hours including cutting time. The sleeves are a different length than I've made before for these, and I think I like it. I usually do 3/4 length, but I didn't have enough fabric to do that and a skirt too, so thought I'd try shorter sleeves, and I like them more than usual; I think because they're not so short, but they're also close-fitting, which is not usually true of longer short sleeves. I haven't made the skirt yet. I am thinking of putting a wide band of self fabric at the bottom of it. Here's a photo of the top with my brown skirt from this year's SWAP. So, I guess this is another SWAP coordinate!

Once I finished this year's fair shirt, it was as if a weight were off! I'm feeling so much more relaxed. (I'm also on the new "Get More Sleep" regimen, which I think cannot help but be a plus. I got my Marfy Fall pattern catalog yesterday, and a mailer with swatches from Michael's Fabrics, so let the fun begin!
Posted by Liana at 8:29 PM 2 comments:

Yes, I'm sewing for the fair again this year. I've been working on 2 shirts for Pearle. Almost from the beginning I've known that the grey/white stripe will be entered, not the blue/white stripe. Funny how each fabric has its own personality. Some (like the gray) do everything you want with no problem. Others, such as the blue, are more difficult. It's turned out nicely too, but it just seemed to fight me every step of the way. Same result, much more trouble. I mentioned this to my sister, and she said, "I see. When we were growing up, I was the gray stripe and you were the blue stripe." I have to admit, she's probably right. Anyway, I have only the buttons and buttonholes on the gray left to do, so I'm nearly done. I have to enter my things on Monday, so not quite down to the wire, but close. I'm also planning to enter some knitting, and perhaps some other sewing. I won't enter as many things in the County Fair as the upcoming State Fair probably.

I think my sleep habits are finally catching up with me. About a year ago, I began to sleep only about 5 hours a night. I was doing a lot of sewing very late, and it was great, as there were NO interruptions. The last couple of months, I'm beginning to need more sleep again, but I'm still running on the old schedule, which I really liked, as I got so much more done. I'm beginning to feel pretty sleep-deprived though, and I've got to just bite the bullet, and realize I have to give back 3-4 hours of my day again, and begin sleeping 8-9 hours a night. For years I had a hard time making do with less than 9 or 10, so the sudden cut back to 5 was fantastic.
Maybe it will come again someday.
Posted by Liana at 10:31 PM No comments:

This is the pattern I began after I finished the Mauritius sweater. I fell in love with the zigzag cable pattern. I'm doing it in the Mushroom color, and I got the yarn from Elann. It's a lovely, soft microfiber yarn, and the stitch definition is really good. It will obviously look much better after it's blocked. Elann has the pattern as a free download. 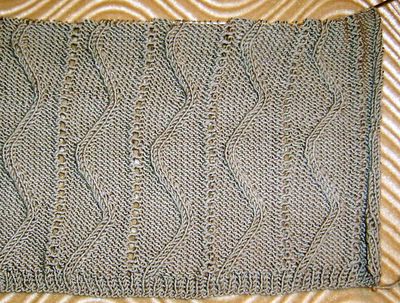 I'm still working away on the Lily Euroflax shell, but it's nice to have something going that's a faster project. The Surf shell is done on size 4 needles, so is a lot faster going than the Lily on size 1.

I'm also just starting on a few shirts for Pearle. I'm trying to get them (or at least one) done for his birthday, and for the upcoming County and State Fairs.
Posted by Liana at 10:49 PM 2 comments:

Here are 5 new campshirts I made from the eQuilter fabrics I bought. I finished the Shoe print one last weekend to test the changes from the plaid Madras version, and made the other 4 yesterday, while I was watching the cats to make sure they didn't escape out the basement door as it was being painted, and so had to be open a ways. I got them all done except the hems and buttonholes. I did those today. I'm pretty happy with them. They are all fairly crisp fabrics except the Marbled Butterfly print, which is quite silky feeling. 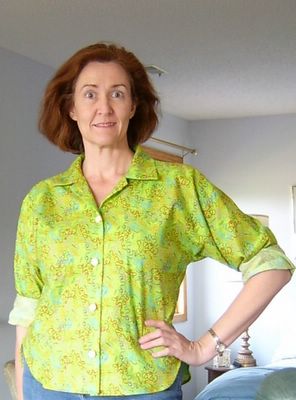 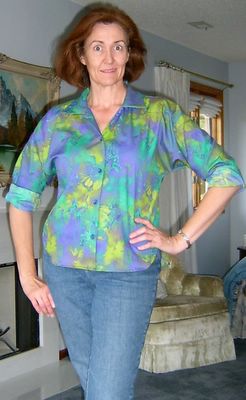 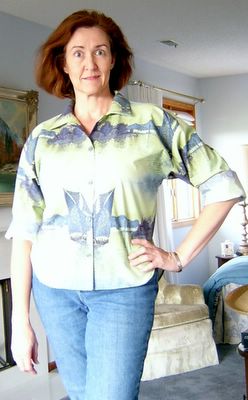 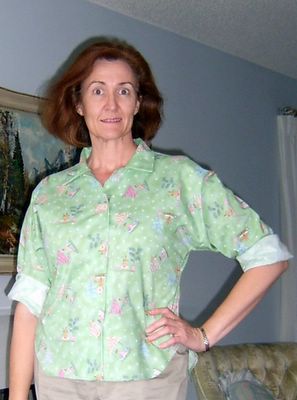 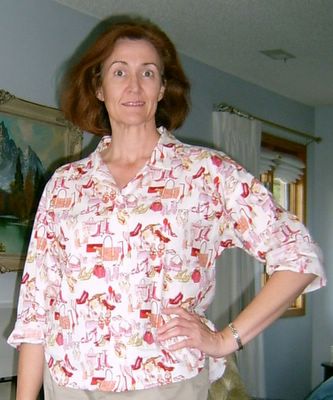 Here's the finished sweater. I completed it on Friday, and I think it turned out well. After steaming it, the measurements were exactly as specified, so I was pretty pleased. Since there are so many holes in the pattern, I may wear the top that matches the skirt under it. It would make it warmer too, if that becomes necessary. Hard to believe with 100 degree weather for the past week and forseeable future, but I'm sure winter will come again.

This was really very enjoyable to knit, and went quite quickly. Here's a link to the first post about this sweater. There was a mistake in the pattern, but it was fine once I realized what it was. I just really like this yarn too. The combination of the shiny ribbon and the very matte nylon with attached "wormy" pieces is very pretty.

Here is a photo of the front with plain fabric under it so it shows the stitch pattern. 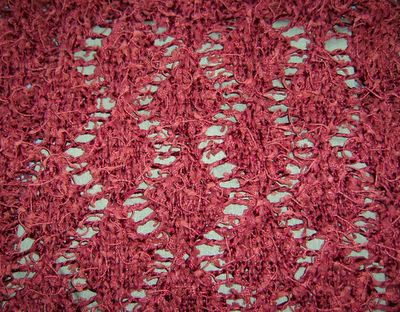 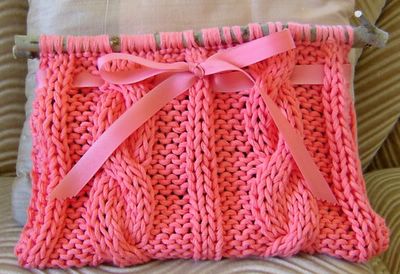 Rustic Bag
Here is the finished Knitted Rustic Bag I've been working on. I really like the stick handles, and I used a turned, interfaced rectangle as the lining, and added turned, divided pockets on each side, and a magnetic snap as a closure. You can see photos of the bag before I cut the extra length from the handles, and of the interior if you click here.

I used a chunky weight cotton yarn from Portugal called Rosarios 4. It took exactly one skein, and I had none left over, not even an inch. I got this idea and pattern from Cast Away and the pattern from Yarniverse's Free Patterns.

I'm quite pleased with the finished product, and it will be a fun summer bag.
Posted by Liana at 3:57 PM 5 comments:

Well, I've been working away on several projects, and none of them are done, but I'm getting closer.

The Gedifra Mauritius sweater is working up faster than I'd thought it might. I'm done with the front and back, and am 1/3 done with the first sleeve.

The Euroflax Lily shell is coming slowly, just because it's such a small gauge, but I'm pleased with my progress nonetheless.

My new knitted purse is really coming along. I finished the knitting a week or so ago, and I needed to purchase a dowel rod so I could make the handles. I wasn't getting anywhere near a place that sold them, so I began to think of other things, and came up with sticks, such as are used on Lois Ericson's tea cozy pattern, which I think is adorable. So, I collected 2 nice ones when I was trimming some bushes, and I have put the loops onto them, and will cut them to length as soon as I am sure they're right. I'm working on the lining now, and have found a cute trim to use as well. The stick thing may be a gigantic mistake, but I'm liking it so far. I was worried about the loops sliding off a dowel rod, but I certainly won't have to worry about that with these!

I haven't gotten any farther on the camp shirts, and I had planned to work on them tomorrow, but I'm not sure I won't still be interested in finishing this purse first.
Posted by Liana at 1:09 AM No comments: