Lots of Inputs, Not Much Output

It seems like I haven't had the heart to do much sewing lately, and although I've been knitting some, I seem to have mainly been buying lots of fabric and yarn that I plan to sew or knit or whatever. From what other people have said now and then, this seems to be a common response to the inability (for whatever reason) to create. 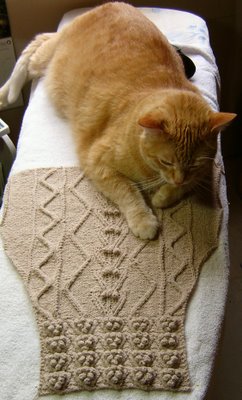 Above, the Peep is laying on the partial first sleeve for the VK Bobble/Cable Sweater. I'm getting close to where the cap shaping will begin, and after all this time with this pattern, I'm finally getting to where I can do most of it without looking at the chart. The center panel still takes a lot of care, as the changes are not intuitive, for me at least.

I decided to begin on the Silky Tweed Tank too, as I'd like to have it for sometime this spring or summer. I'm just above the waist on the back, and it's going pretty well. It's quick and easy to knit, and the pattern is very easy to establish. You can see my progress so far, below. 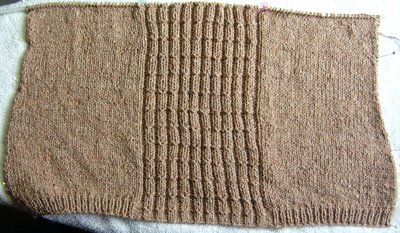 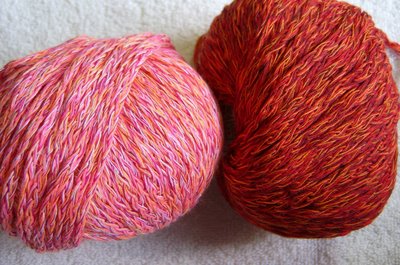 The two balls of yarn above are both Schachenmayr "Toy" which I got from Elann.com. I have begun a shell with the Red Maple color, (on the right) and will use the Fruit Punch (on the left) for a lacy cardigan. I think it will make for an interesting Twin Set. You can see the pattern photos below.

The pattern instructs you to cast on with a different method than I've used before, and I had trouble with their instructions. They wanted you to cast on with 2 yarns, but it didn't seems to be a waste-yarn cast on, and I just couldn't figure it out, so I finally searched June Hiatt's Principles of Knitting to see if there were clearer instructions. I decided that what they wanted was Two Needle Cast On, which is very easy, but sort of complicated, especially to write directions for. It gives you quite a lot more yarn in the knot section of the cast on, and so you get an edge with a lot of give, and yet it doesn't seem to be shapeless in any way. She says it's perfect for scalloped or other shaped edges, as it follows them, and doesn't pull in, and I must say, it seems to work just as she says. I recommend it, and you can see the edge and a close up below. 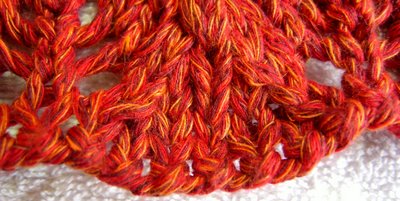 I've also been haunting the Fabric Mart website, and ordered my first bundle among other things, so that should be exciting. I hope so anyway.
Posted by Liana at 9:30 PM 1 comment: I just want to thank everyone who was so kind as to read or even respond to my last post. It's so comforting to know that others have been through what we are going through, and that so many of you commented is a special gift. I appreciate it so much!

Thank you,
Liana
Posted by Liana at 8:29 PM No comments: It's been over a week since I posted, and there's been a really good reason. Our beloved Catso died the day after Easter. He was only 6 years old, and seemingly in perfect health. We came home Monday evening, and he was screaming in pain, and was in the hall, unable to walk. We didn't know what was wrong, but when we took him to the emergency vet, she immediately knew that he had had a stroke. He was paralyzed from the waist down, and his lungs were filling. It was a horrible decision to have to make, but the only one. We had him put to sleep.

The fact that he was so active and obviously felt great right up until it happened has made it much tougher to deal with. As a cat or any pet gets older, you realize that the day will come, eventually. This was a real shock in many ways.

The few friends that I've told have overwhelmed me with their wisdom and kindness, and I decided I had better just let the word out generally as well.

We do still have The Peeper, who is Catso's younger half-brother. He's lost too, as he really never had to make a decision before in his life. The Catso simply took charge and kept it. Peep was very happy just to be allowed to go along on their adventures. He's a little clingy right now, but he's doing his best to keep up the back yard patrols regularly, and he's a mighty hunter in his own right. One cat cannot replace another anymore than one person can replace another, but it's kind of nice to have something to keep me going on some of the daily routine at least.

We buried Catso in the garden and we've been doing some changing of the landscaping in the area, especially moving a stepping-stone path over and with a different curve. Pearle supervises and I place the stones where he says they should go, and we got it about half done yesterday evening. I'd already mowed, sprayed dandelions, moved some daffodils out of the new path of the path, and weeded some beds, so it was really a full day after we went out and checked the last farm planted to corn. The soybeans will be next.

"A Question of Thoracic Shaping"

You may have noticed a link I have in the sidebar to Fashion Incubator, Kathleen Fasanella's fascinating site. I check her posts often, and there's always something interesting. Her latest post is called A Question of Thoracic Shaping and in it she is asking whether readers have the type of thoracic shaping she is discussing. This may sound arcane and boring, until you grasp that what she is really talking about is why bras do not fit. Now, who can fail to sit up and take notice of that? No one I know. I suggest you take a look at her post, which includes many photos and diagrams, and see whether you think you fall into her "egg shaped" category, rather than the "standard" oval. (It may not be really standard, but it's what all the bra manufacturers appear to be designing for.) Egg shaped seems to basically mean that you're wider from front to back than side to side, although I'm sure I'm oversimplifying it greatly.

I have read the post several times, and I cannot really decide whether I am an egg or not. I seem to have at least some of the characteristics, but I'm just not sure. I find that it's rather unsettling to realize that I am not as familiar with my own bodyshape as I thought I was. I know I've never been completely happy with bras, but who has? Anyway, go; read the post, and comment. She has a plan to help those with egg-shaped torsos, and maybe everyone else along with it.
Posted by Liana at 1:22 PM No comments:

As you may know, I really struggled to find something to wear this floral jacket with. Everything I tried was just a little off, but I think this may be the winner. It's a pale pink Jalie #2005 Tee and a denim-like Brussels skirt. I also could not resist this hat, which I think goes rather well with this. It's definitely a spring outfit, and it looks like spring around here now, finally.

This was just a trial of this Marfy pattern, but I really like it, and I think I will wear it quite a lot this summer, if not with the hat, etc., every time. It looks very nice with jeans, and can be pretty casual.
Posted by Liana at 2:31 PM 3 comments:

I don't know why, but I've been sort of floundering around, not able to settle to one project. I suppose it's because I can't really make up my mind on what I want to do. What I need to do is finish the Matka Jacket, which really only needs a lining and some finishing touches, but thoughts of blouses just keep pushing it to the back of the line.

I want to use my Little Blouse pattern, but add a button front to it, and sleeves. So, I need to do some pattern work, which shouldn't really be a problem, but for some reason I began altering a very old favorite blouse pattern instead. It's a button front, but has extended shoulders, which I made not quite so extreme, and a long collar, almost like the front of a middy blouse. I had one in white and one in pale gray that I wore a lot, but they and the pattern are much too large now, although there's nothing wrong with the style. Anyway, I got the alterations done tonight, and will try it out tomorrow. Actually, if I like it, I could use the basic style for a button front, V-neck, tie-collar blouse, which is what I wanted to start with, so perhaps this wasn't so abstruse after all. I think I would use the little blouse side seam, hem, armscye and shoulder, and use this front extension, and facing. I have a lovely sleeve that will work very nicely. I'm feeling a little more relaxed already!
Posted by Liana at 12:50 AM No comments:

Here is the second version of the Vogue 2719 blouse. I like it much better than the first trial version. The collar is about half as wide, the length is better, the sleeves are longer, and the back darts are stitched. I also left out the zipper or any kind of closure. I didn't put shoulder pads in this one, but I may try them. I think I'd like 3/4 sleeves even better in this.

It's extremely comfortable to wear, and will work well with pants or a skirt I think. The fabric is a cotton batik print from Timmel Fabrics. It's no problem to put it on without a zipper or other closure, as the neckline is quite open. The only thing that is kind of weird is the fact that the pattern calls for a button on either side of the collar opening. It looks to me as if they pinned the collar shut for the photo, and I can see why, as otherwise, there is no way that the buttons would ever show. I have very cute little square cutout sun buttons in a dull gold, but no one will ever see them. A hook and eye would work to close the collar, but it would be unattractive when worn open. I think I'll just skip the closure for now, and maybe forever. I'm a little bit curious about trying to make the whole dress, which would be easy with the bodice altered. It's made in 2 pieces anyway.

Here is a photo of the original (lower) versus my redesigned collar. The neck edges of both pattern pieces are facing each other. You can see that that curve is unchanged. The outer style line of the collar is what is drastically different. I've never seen such a stylized exaggerated collar as the original, but it was interesting to try it. You can see another photo as well as the trial garment and the pattern photo here.
Posted by Liana at 10:02 PM 4 comments: