This is the finished Katia Shell in green/gold Serpentina yarn. I think it turned out quite well, and it's very comfy. The yarn is a mostly cotton tape, and is almost dry feeling. The close-up below shows the ladder stripe which is made by unravelling the center knit stitch after you get to the shoulder bind-off row. I like the look of the increases and decreases alongside it. Here's a link to more shell photos. 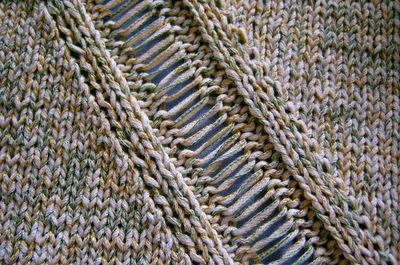 Ladder Stripe Close Up
Posted by Liana at 1:37 PM 2 comments:

I finished the knitting on the Katia shell this afternoon and started the finishing. It's going quickly too, and I imagine I will be done tomorrow. The stripe turned out really cute. It's kind of fun to do, as before you bind off for the shoulders, you drop the center stitch in it, and that creates the cute ladder effect. The color seems to be very nice too. The yarn gives a nice mottled effect.
Posted by Liana at 10:56 PM 2 comments:

This beaded appliqué is from Earth Beads Gallery, and is fairly large; a little over 6” long. I plan to use it on a summer top or jacket, but I have no concrete plans yet. It’s really not my usual kind of thing, but I loved the colors and it’s just kind of neat. Here's a close up of the little tuft at the bottom of the feather. 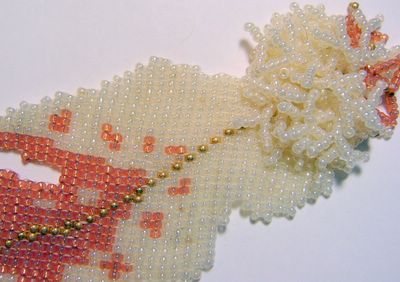 Very Large Buttons
These very large ceramic buttons were also an Earth Bead Gallery find. They're 2" square, and a little heavy, but they will be used for something.
Posted by Liana at 9:24 PM No comments:

This is the cardigan I finished Friday night. I think it turned out rather well, especially considering how long it's been since I actually knitted the pieces. I wasn't even sure what size it was going to turn out to be, but I think the fit is pretty good. You can see more photos of it here, including a close up of the buttons.

The scarf is made from 2 skeins of Paton's Boa. The colors are great together, but I think it will be a while before I wear either of them. It was over 90° here today! 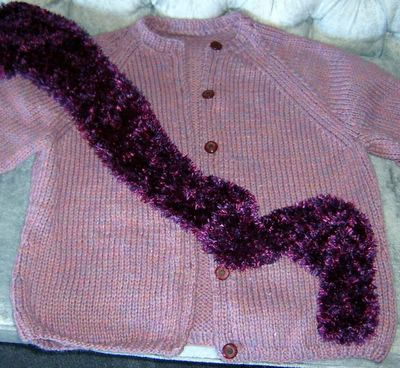 Scarf with Cardigan
Posted by Liana at 11:59 PM 2 comments:

I finished the mauve raglan cardigan last night, and am rather pleased with it. I will post photos soon.

This afternoon I finished a "fur" scarf that was just an "idle hands" project. It's cute though, dark blues and purples. It will be nice for next fall.

I also ordered some Euroflax Barcelona in Gypsy Bronze, thanks to May! I wasn't even aware that they had beautiful colors like these. This is really my kind of thing, much more than the usually variegated yarns that seem to always end up as horizontal stripes. I like the tweedy, heathery colors much better, and this looks perfect. It's supposed to be 4 colors twisted together, so I hope I like it as much in person as on the monitor.Here's a link to the colors available. It's about halfway down the page, and the Gypsy Bronze is on the upper right.
Posted by Liana at 9:34 PM 1 comment: 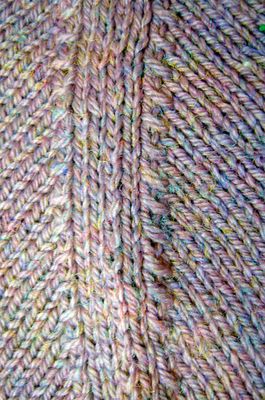 I think the way the full-fashioning comes together on the raglan seamlines of this sweater is so pretty. This is another sweater I knitted a couple years ago and never finished. I guess I assumed I'd be in the mood sometime, but I didn't know it would take quite this long! The yarn is Neveda by Schjeepes. It's a chunky worsted. The pattern photo is below, and is the one shown on the model. 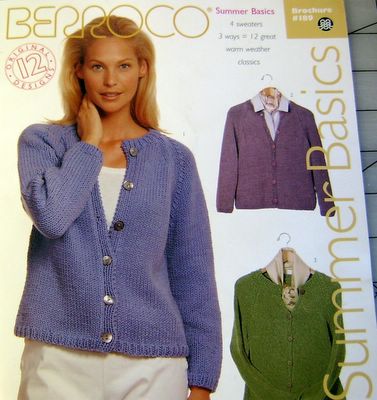 I also worked out the changes on a knitted shell pattern from Louet, called Lily. Here's a photo of the pattern.

Here's a link to more information about it. It's about half-way down the page. The pattern is written for Euroflax Sportweight yarn, but I may do it in something else. I want a pink coral that's not just a flat color. Jamieson has some lovely Shetland wools that would be gorgeous, but I don't think I want wool.
Posted by Liana at 4:06 PM 2 comments:

This is knitted from Berroco booklet #189. I used Vrillée Fine yarn from Schjeepes in Lemon. I actually finished knitting the pieces of this in the summer of 2003, but just put them together and picked up the stitches for the neckline finish today. It's a pattern I've done several times, and I think it's a nice one. I changed the lower edge from a rolled edge to 6 rows of seed stitch, which I think is much prettier, and much more wearable.

For some reason, I'm suddenly in the mood to knit again, and I'm finding projects in various stages that I could pick up and finish. Quite a few of them are too big now, and I don't know what to do about them. Should I just rip them all out and start over, or finish the knitting, and cut and sew to the right size? I need to read through some of the patterns I was using, and the notes I made to see if I can even figure out what I was doing. There's one very complicated Anny Blatt cardigan with 2 yarns alternating in a tweed-type pattern (if I even remember that right) that I have a whole page of very tiny notes and specific calculations that look quite important, but I don't know if they make sense anymore. It seems to be all done except part of one front and the sleeves. The yarns are gorgeous and the colors are wonderful. I hate to rip it all out, but it ought to be finished. Oh well, I'll see if this mood lasts anyway.
Posted by Liana at 11:32 PM 1 comment:

This is the second pair of drawstring pants I've made. The third are halfway cut out, and will be done soon I hope. These are a very thin rayon, and will be really nice for hot weather. They're almost like wearing pajamas they're so comfortable. I narrowed both the casing and drawstring, and added the difference to the top of the pants themselves. I like the effect much better, and they're more comfortable to wear. I may put in pockets next time, as I suddenly remembered a great inseam pocket from a Great Copy pants pattern that I think will work very well.
Posted by Liana at 11:04 PM 2 comments: 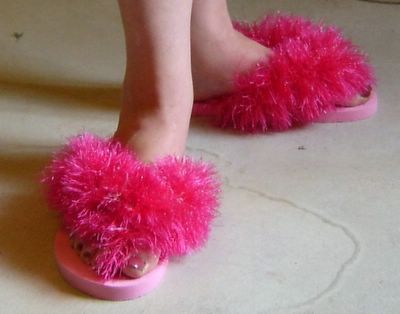 Emily's Flip Flops.
These are the flip flops I made for the daughter of a friend. I think they're just darling, and much, much furrier. Just right for a young girl.

I used Bernat's Disco, a very long eyelash yarn with a little glitter, and Red Heart's Foxy, a variegated, shorter eyelash yarn.
Posted by Liana at 11:02 PM No comments:

Drawstring Pants
I began and finished a pair of summer drawstring pants today, using my favorite Double Burda pattern. I tried a piece of stretch poly/cotton that I've had for a while, and cut the pants as usual, didn't sew the darts, and added a sewn on casing with a self-drawstring. The whole thing only took me about 3 to 3½ hours, and they turned out beautifully. I did a triple topstitch hem, and I’m already planning several more pairs in some very light-weight fabrics. You can see a side view here.

I took my fabric card file with me today when I knew I’d have some down-time, and it was great fun to put together combinations of fabric, and think about what patterns would go well with what fabrics. I need to add a list of my favorite patterns and their yardage requirements, as well as a few generalizations.
Posted by Liana at 12:14 AM No comments: 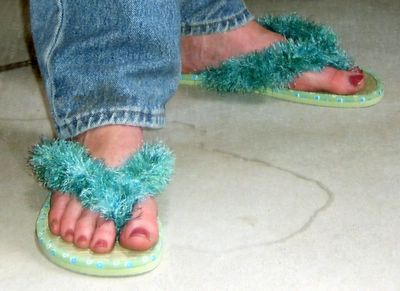 These are just silly, but kind of fun. The pattern is available online from Lion Brand Yarns. I actually made mine with Red Heart's "Foxy" as it was the right color for the flip flops I had. I haven't really crocheted in a long time, but I made them last night in about an hour, so a nice quickie project, and what a great gift they would be.
Posted by Liana at 9:40 PM 1 comment:

Twist Top with Drawstring Pants.
I finally succumbed to the call of the Twist Top. Not the infamous Burda World-of-Fashion version, but my own version, made from the Jalie 2005. I started with the V-neck pattern, and changed the front to a cowl neck. I constructed it as usual, then put it on and began arranging the twist at the neck. I ended up with a version that I like pretty well. It also has a twist at the hem. The hardest part was stitching the twist invisibly. Much easier to hold it than to pin it, and to pin it than to sew it. It's the first thing I've done since doing a major overhaul of my sewing area. It was looking so pristine that I felt I needed to do something quick to get back with the program.

I am not so sure I'm crazy about this, and as my sister says, "Why do you want a Twist Top anyhow?" She may be right, but it was kind of fun, and certainly wearable, if not my favorite top. I wonder if it might not be better on me in a woven. Maybe I should just quit while I'm ahead though. Not everything is going to look great on everyone, and now and then, I apparently like to prove it!
Posted by Liana at 1:26 AM 2 comments: