Concertina Socks & A Dress in Progress Here's the finished pair of Concertina Lace socks. They were done several days ago, and so are probably the fastest pair of socks I've ever made, because I've had plenty of time to just sit and knit. I think they're kind of cute, and they'll be fine this winter when it's cold.

My big thing right now is that I'm working on a dress. It's a re-make for me of a Marfy pattern (#1128) that I've made once before. You can see the pattern below. It's basically a really nice sheath dress, and I've thought it might be a TNT for me. No pictures of the new version yet, but this time I'm doing it in a gorgeous and fairly beefy cotton matelasse (Valentino Atelier) print that was a very kind gift from a dear sewing friend. She'd made a skirt of it, and gave me what was left, which was a generous amount, and plenty to make the dress. I'm always amazed at how little fabric Marfy patterns take compared to the Big4. This was 60" fabric, and it took only one dress length, plus facings I think. I had planned to use self bias to turn the edges, but now I'm thinking of facing it, so we'll see. I'm doing it without the sleeves, and apparently (after the first try-on) without the collar. I'm going to do one of those trendy gathered/pleated necklines that just fold under. It's a print, so it's got plenty going on without a contrast collar. I found some jute-like ribbon that I'm hoping to incorporate somehow, possibly as a bow (big surprise there), but a flat one. I bought a longer zipper yesterday than is called for. It asks for a side zip, about 9" long, but it's a chore getting into and out of it, so I decided to throw caution to the wind and put in a 20". That should do the trick.

This is the first real garment project I've done for a long time, and I'm getting excited about it. It's nice to feel like sewing again.
Posted by Liana at 2:01 PM 5 comments: Links to this post

We all change our mind, and I think I change mine perhaps more often than most. The draped top I was working on finally got to the trying-on stage, and I've decided that the checked part has to go. It's just not me, and seems to be contributing the dowdy factor in this instance. I love what I ended up doing with the sleeves (a wrapped sleeve) and I think using the green knit for the whole thing will be so much better, and much more me. The checked fabric front seemed to be giving it an 'apron' look to it that just wouldn't go away, and was pretty bad. Now I'm wondering if I can just use the checked piece as a pattern for a new front. Probably it will work as a starting point, but the woven/knit differences will require some changes I'm sure. Oh well, I'm starting to like it at least. Now to go rip off the checked travesty.

I finished the first Concertina Lace sock yesterday, and it's very cute, although I think the stripes are kind of awful. I shouldn't buy variegated or painted sock yarn, as it always looks great in the skein, and almost always is deeply disappointing when knitted up. I'm just not a horizontally striped knit kind of person, at least not socks. I can see that this yarn gives a really cute faux-fair-isle effect, but still, not me, or at least not in this color combination, although I love the colors.
Posted by Liana at 12:49 PM 4 comments: Links to this post I decided it would be interesting to try draping a top on my dressform. I see so many things that appear to be done without a pattern (probably not really, but you know what I mean) and although this quickly changed into something very different than what I'd originally had in mind, it's still been a fun project. The check is a crinkled woven, and the solid is a knit. I decided to just 'go for it' and have been cutting and pinning with abandon. I've been basting since I took the photo yesterday, but it will be awhile before I can actually try it on and get a feel for how it's going to look, since I still have some 'things' I'm wearing around me since the surgery. But, since it's on my form, it's probably going to be close enough to make the fit tweak-able.

I'm not sure I'm crazy about it, especially now that I've seen the photo. It definitely needs something at the neckline, which I had planned from the beginning. I wanted an asymmetric neckline, but I'm not sure about the angle of this. I will have to see. The sleeves are a definite experiment, and may change a lot before they're done. I have to get it basted before I can take it off the form though. I started it a couple weeks ago, and now I'm not able to do much on it at a time, as I still have no stamina whatsoever. That is the most annoying part of this whole thing. I have been doing some knitting, and finished a pair of socks. I used Serenity Sock Yarn from JoAnn's, and the Lacy Arrow pattern from SpinOff's Socks book. 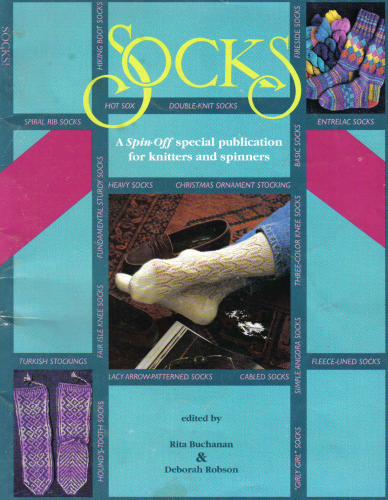 I have used this pattern several times, (it's the center photo on the cover) and it always turns out nicely, and is interesting to knit. I have to say that I think it would be better in a solid color, or at least one not so wildly striped, but it's a fun yarn. I've started another pair in the Concertina Lace Socks
pattern by Jackie Erickson-Schweitzer. 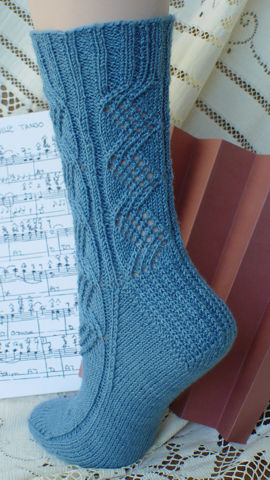 I'm up to the heel flap on the first one, and I have to say her heel method seems nice, but is kind of fiddly. It looks like it will be nice and cushy, though.

I want to thank you all for the very nice wishes and comments after my last post. I am attempting to find out what part of Sweden my ancestors are from. I am Swedish on both sides, and I know I used to hear about Malmö(?) as being a place in family history, but I never paid enough attention to know just what it had to do with things. There are relatives who've done extensive genealogy research though, and there's a big family reunion every August, so I may have to find out a few things this year. I do remember finding it very interesting several years ago when a sewer from Sweden posted some things on PatternReview, and her figure was almost exactly like mine. Aha! I thought. My alteration/figure problems aren't what I usually read about people dealing with, or at least not all of them at once, but she seemed to be doing all the things I have to do. Somehow, that seemed encouraging or something.
Posted by Liana at 3:18 PM 1 comment: Links to this post I thought you'd enjoy seeing this card, which was about half-full of snaps when I got it. It was part of my grandmother's sewing things. I've no idea when she might have bought it. Although I do remember Penney's having a sewing and fabric department, I don't think snaps were 4 cents then. Now they're apparently about $1.50 for 10 of this size. One thing about sewing notions like this, they don't get outdated or too old to use, so 'snap' them up if they are offered.

I got my brother's bread machine in our family's 'Frivolous Appliance Round-Robin', and I'm having fun with it. Like most people, their bread machine was used a lot when they got it, and then less, until it finally sat there, unloved. So, I said I'd take it for a while, and they could take an extra KitchenAid mixer I had on hand. Everyone's happy, and we are storing new things in our kitchens instead of the old, boring ones.

My favorite bread so far is called Franskbröd, (correction courtesy of Mia) supposedly the most popular bread in Scandinavia. It reminds me strongly of my Swedish grandmother's homemade bread that we could never duplicate. I've made it a couple of times now, and everyone agrees with me. This is NOT a photo of it however. This is an egg bread with poppyseed which is also very good. I'm recovering from some minor surgery right now, although it's never minor when it's you, is it? Actually, it was my first surgery of any kind. It's been a week now, and I'm beginning to feel a bit like myself again, so I'm pleased about that.
Posted by Liana at 8:19 PM 9 comments: Links to this post