The Asian Fabrics Are Nice Together (Hooray!)

I finally got to put the jacket body together with the new contrast fabric tonight, and to my great relief, it's very nice. I ought to be able to finish up in a day or two I hope, if nothing unusual crops up.

I've been knitting with some really strange yarn called Samoa, by Austermann that I got from elann.com earlier this year. I bought two colors, one similar to what's in the picture below, and the other is a soft pink. It's 100% nylon, and it's extremely weird to knit with, as the little lumps are kind of like blobs of hosiery fabric and in between is just a medium thickness thread, about like a topstitching thread, so it is quite a difference in feel when knitting, and sometimes the blobs want to hang up on the threads. There is no easy movement of yarn within the stitches as there usually is. It makes a cute fabric though. I'm doing a shell and knitting circularly, as this would be horrible to have to sew.

I've been waiting for the chrysanthemum coordinate I ordered from eQuilter for my Asian jacket, and while I've been waiting, I worked on the jacket up to the point where I could go no further without the fabric.

At this point I thought an instant gratification project was in order. So, I pulled out Simplicity #4020

and decided on View B (the blue one on the envelope) in a very thin knit from JoAnn's. It's a tie-dyed fabric which is then overprinted with a brown/copper opaque ink. It was not quite the instant project I envisioned, but I did finish it in a day. Here's the front view. I like it quite a lot, although it could be a little more fitted. This kind of top is difficult to predict fit on without a muslin, and of course the drape of the fabric is critical, so a muslin may not tell you as much as you'd think, unless your fabric characteristics are identical.

The chrysanthemum fabric did come today. It's absolutely gorgeous, and I immediately began to worry that it wouldn't look right in the jacket. I've prewashed it and pressed it, and I think I'm just going to forge ahead tomorrow and see how it is. I think it might be wonderful, but it's a stretch for me to work with so many patterned fabrics at once.
Posted by Liana at 1:21 AM 5 comments: 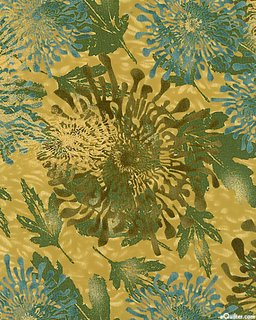 Well, I've progressed on several fronts. I've ordered some different contrast fabric for my Lonni Rossi cottons jacket. The original, which you can see in the topstitching photo, is just too boring. The main fabric is in the same colors, with a dark bamboo print, and a few gold leaves and crickets here and there. I have now ordered another Rossi print, which is a large scale chrysanthemum, with a lot more gold in it. You can see it above. I think I will like it a lot better, and it should liven things up a little. I'm planning to do some decorative topstitching on both sides of the seams. Maybe not all of them, or maybe not all the same. I've been testing threads, and I think I've found the perfect gold that matches the metallic printed gold. It's a Madeira Rayon thread, and is the center line of stitching in the photo. The green thread is a very heavy (12wt.) cotton, from Sulky. I really like the look of it, especially the lightning stitch, which ends up looking a little like a twisted cord. I don't think it's the absolute perfect color however, and so I tried to find a better match today, but the shop was closed by the time I got there. I will try again tomorrow. I want something that's a little more closely matched, and thus more subtle than this. I've used this heavy thread for topstitching before, and I really like how it makes the stitching stand up off the fabric. I've also been testing stitches. I like the little clumpy things, and also the lightning stitch. I think I'll do some of one and some of the other, in groups as shown on the sample. I don't think I will use any of the straight stitch. I like it, but it looks awfully plain compared to the other 2 stitches. I was planning to do this on all the seams, but I'm now thinking just the main ones, or even just between the fronts and sidefronts. This will become clearer as I progress.

I also have made one more Potato Chip scarf, this one a black and white mohair blend. It's really soft, but with enough body to hold this shape very nicely. Finally Back on Track, I Think

I've been doing more knitting than sewing lately, and mostly of scarves I said I'd make for a fundraiser for my music fraternity, Mu Phi Epsilon. I was afraid I would leave it until the last minute and not get anything done, and actually I've done more than I thought I would, since at the same time I seemed to have trouble getting going on a particular sewing project. I've done 7 knitted scarves and hemmed 2 poly silky ones so far, and have another one on the needles. I've finally been able to knit in the car again, and so it's nice to have a very low concentration project going. This one is a black and white nubby yarn, and fairly soft.

But, I have been able to finally get with it on a jacket I want to make. It's Vogue 2852 and I think it's very similar to a jacket I drafted last year, but with several different features, like princess seams, set-in sleeves, and a different collar style. This is actually a very appealing style to me for every day, easy wear, and I hope it's going to work out. So far, I'm altering the pattern, and I need to do a quickie test of it next.

I believe it would work well as the reversible piece for this year's SWAP contest, (this link will take you to a chat board on Stitcher's Guild with several SWAP topics) in case I decide to join in. I may not, as I'm to do a program on wardrobing for my Sewing Guild in January, and the sewing on the contest pieces isn't to start until January, so if I get a new wardrobe group done for the program, I may not do another for the SWAP. Oh well, I'll just see what happens.
Posted by Liana at 10:00 AM 4 comments:

This is the latest Potato Chip Scarf. I may keep this one myself, as it has an edging which is very pretty I think, but the edging is also pretty loose, and may get snagged rather easily.

I found out yesterday that I won the Personal Threads Boutique prize for my Cable/Bobble Sweater at the State Fair! So, that was a very nice surprise, and thank you to Personal Threads!
Posted by Liana at 12:19 AM 1 comment: