Thank you to everyone who commented so kindly on my Mermaid Gown.  It took me forever to get the post up, as I wanted some close-ups of the embellishment and it just wasn't happening.  So, here they are.  I used a very free-form style of beading and just found a bunch of beads that I thought looked good together and with the fabric.  I wanted something that would end up looking kind of floral and encrusted without being too much.  I am very happy with the way it turned out. 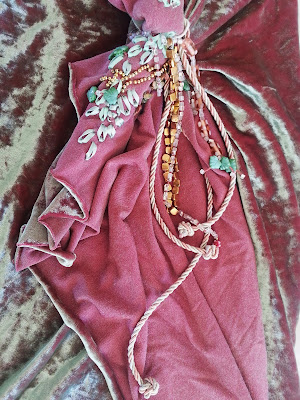 This is the twist at the waist and the strung beads and cords that hang down from it. 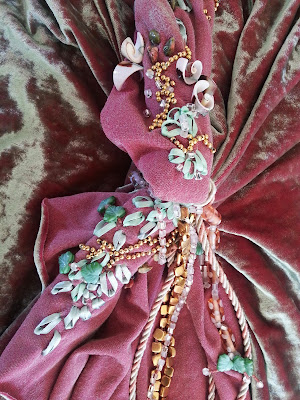 The second photo shows the central drape a little higher up showing the twist and what's just above it.  There are a lot of silk ribbon 'leaves' mixed in with the beads. 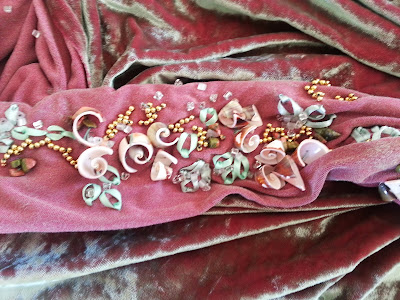 The third photo is higher up yet on the drape, showing the main style of embellishment.  The curving beads are cut pieces of spiral shells, a little hard to stitch on, and they don't stay perfectly still, but that's okay, it gives a little more movement to the design.


This is the perfect packable gown, as it seems to eschew wrinkles no matter what, and in fact I was carrying it around the house in a tote bag while I was beading on it.  Since it can't and shouldn't be hung, it now lives in a fabric-covered box on a shelf in my closet, waiting for its next appearance.

I can't tell you how much your kind and tremendously thoughtful comments mean to me.  I appreciate and reread each and every one.  Thank you.
Posted by Liana at 12:17 PM 8 comments: 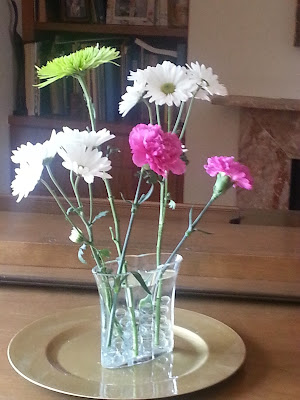 I just have to show off my lovely flowers.  I had some kind of a virus Friday that laid me low and my sweetie brought me flowers. 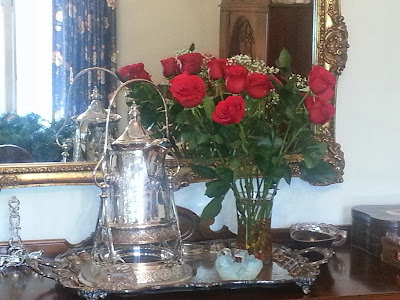 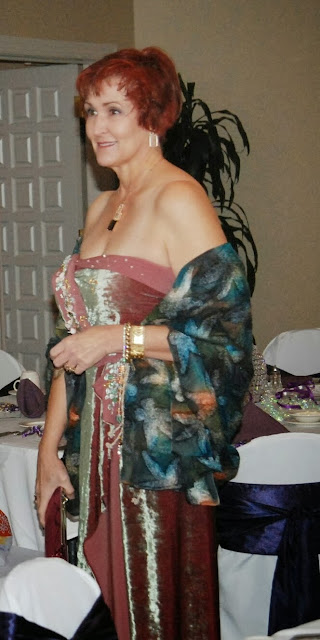 I have been working on this gown for quite some time, since I wasn't in any hurry and didn't have any place to wear it particularly.  When the 90th Anniversary Banquet for my Mu Phi Epsilon alumni chapter came up, I knew I had to finish it.

The fabric is a mint/dull-red cross-dyed stretch velvet which was a gift from my dear friend Patti.  In the photos it shows as much more red than it does in person, I think because of the flash, but it is very changeable, and a lovely fabric.  She bought it and later realized that it wasn't her colors.  However, it IS my colors, and she was kind enough to let me have it.  I didn't have any plan for it originally, and thought it might become a nice, snuggly winter top.  And in fact, I was holding it up in front of the mirror last winter to see what style might be good when I draped it around myself and realized that it wanted to be an evening gown.

I have long been an adherent to the theory that you can't just pin a length of fabric around yourself and stitch it up as is, with no underpinnings, and have it look good once you're past about 18-20 years old.  I was shocked when I did just that with this fabric.  It was almost magic, the way everything just worked as if it was meant to be.  I don't expect to ever have it happen again.  I simply tacked it where I had pinned it, and didn't even cut at all.  Since the inside is a dull red, it makes a great contrast to the mint/sage green and red of the right side, and I used that contrast for the turn-over at the top.  The slit in the skirt shows both sides as well. 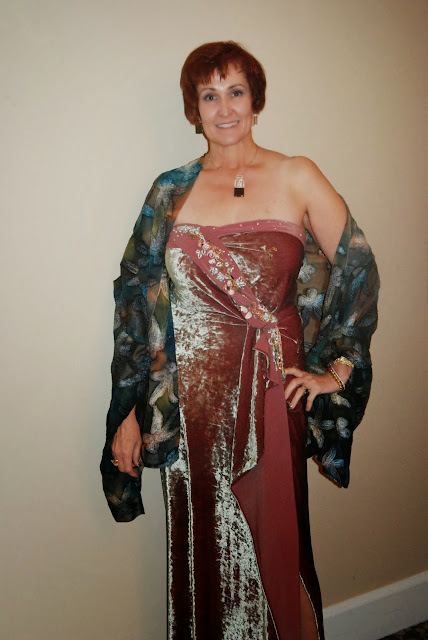 The only interior 'work' I did was to add a grosgrain waist stay that is attached at the point where the waist drape twists.  With all the skirt fabric hanging from that point, it became heavy enough to sag after I added the beading, and the stay holds everything in place.  I wasn't uncomfortable once during the evening, or nervous that my dress was going to move out of place.

The beading was fun, and I just started in without any great plan other than an idea of what I wanted it to look like when I was done, and added more and more, and after the Kenneth King Weekend, I added silk ribbon embroidery and even more beads and some cording and strung beads that hang from the waist drape.

The shawl is a piece of silk chiffon embroidered with starfish (appropriate for a mermaid gown?) that I purchased from eQuilter several years ago.  It's simply hemmed on the ends, and uses the selvedges for the other edges.  It turned out to be the perfect colors to go with this, and just what I needed.
Posted by Liana at 1:34 AM 20 comments: