I'm Back, Sort Of

I'm back to the land of the bloggers, etc. now that my dear brother has fixed me up with a loaner computer until he gets back from his trip and can figure out what to do with mine. I must agree with Melodye when she said grown-up brothers are the best. They sure are! I will try to take some pants pictures too. I just have basic programs on this computer and none of "my" stuff, and I'm trying to keep it simple. I've got a back-up drive, so almost everything is still there, even if the computer itself dies, so I'm not worried yet. 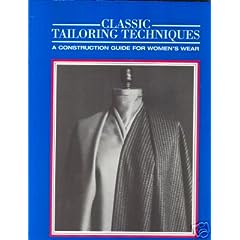 I bought mine used from Abe Books. Thank you Claudine for noting the book in your comment. My computer was so wobbly at that point that if I'd tried to get a link to it, I'd probably have lost the whole post, etc. As always, all help most gratefully accepted!


Patricia, I found a tutorial on sewing godets from Els, who always knows the right way. We're very glad she does, and especially that she's willing to tell us, too. I hope this answers your questions. You can always come over to Stitcher's Guild and ask there, too.
Posted by Liana at 8:34 PM 3 comments: 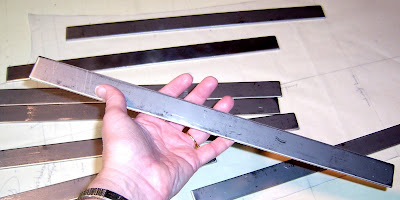 I mentioned to my brother that if he had a chance, some of the metal scraps from his workplace would make really great pattern weights. Well, he found some very nice strips and buffed them smooth and here they are! The really neat thing is that they're stainless steel, so I don't have to worry about them corroding or rusting. They're heavier than they look, and I really like them. I've only had the little round ones that you see in the photo with them, and these are so nice for long pattern pieces. 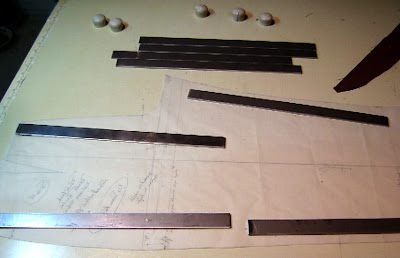 He's also been trying to help me with some computer issues I'm suddenly having. (That's why it's been a while since I posted.) That's his field, and I'm probably going to have to get a new computer at this point, so he's searching for what I need. He's a pretty good guy!

I have been sewing a little bit, and am about to begin cutting out my coat since I finally found layout plan I'd made before ordering the fabric. I thought I was going to have to do it over, but I've been spending a lot of time filing lately, and going through the enormous crop of paper that comes into the house continually, and I ran across it. In a pretty logical place, actually.

I realized I'm really hurting for fall pants. I didn't need anything fancy, just everyday stuff, and I made a pair with my TNT pattern, adjusting slightly at the waist/high hip as per the tailoring book Claudine suggested, and I like the results very much. I used a stretch woven brown with pink pinstripe. As usual, the stretch part seems to cause problems at times. The back has some draping from the side hip down, which I thought was indicative of a lack of length there, but the front is perfect, and I couldn't figure how I was going to fix this. I wore them last night to choir rehearsal, and my friend Jane, the real expert diagnosed "baggy butt" and I think she's right. The pattern has a flat-seat adjustment already, which normally is fine, but with the stretch factor of the fabric, I think it needs more. I may end up with a stretch woven pattern and a regular pattern, which is okay. She suggested a diagonal fold from mid-hip to just below the crotch point, so I'll try that next time. For now, these are fine for every day, and no one is going to call the fashion police I'm sure.

I did side pockets on both sides, with a side zipper, and it worked just fine. I've usually done only a pocket on the non-zipper side before. I put a front stay in these because of the stretch factor and the pockets, and that was a real success. The bad thing is the fabric wants to crease rather easily. They're cute, though, and isn't that why we sew? Here's the finished Gedifra Vest I've been knitting in my spare time. It's a very quick project since it's done with a gauge of 1.75 stitches per inch. That kind of gauge lends itself to basic shaping, and this had interestingly shaped pieces to make up the vest, but I think it could be improved. I'd like it a little longer in the back and sides instead of angling toward the front points quite so precipitously. I didn't use the recommended yarn, Gedifra Highland Alpaca. Instead I substituted Rowan R2 Fuzzi Felt. I got the gauge perfectly, and I'm not sure if this has less body than the original yarn, but I doubt it's a lot different, since the original is 50/50 alpaca/wool, and alpaca is very, very soft. The Rowan I used is 58/16/20/6 Nylon/Wool/Acrylic/Alpaca. I would assume that wouldn't be softer than the Gedifra. I folded the collar double, under itself and tacked it down to give it a little more body, and to control it a little. It was pretty floppy, and awfully wide. You'll notice in the pattern photo below that the model is artfully holding the collar up. Now if it would stand like that by itself, that would be great, but at this gauge, I don't think that's likely to happen. Anyway, I'm generally pleased with this. It's a fun piece, and nice and cozy. I want to thank everyone who commented on my lace skirt. Especial thanks for all the ideas and opinions. I wore the skirt to a music club meeting this afternoon, and didn't wear anything I had a photo of. I wore the olive Jalie Tee, and a longer slip that I made this morning accompanied by great trials and tribulations.

As always, it's a mistake to think that anything you do at the last minute is going to go smoothly. I don't know what was with my new machine, but I suspect pilot error. I was trying to attach the elastic, and all I got was major jamming in the bobbincase. I re-inserted the bobbin again and again, I re-threaded, I read the instructions. Finally it snapped out of it and ran like a dream. I took about 3 smooth stitches, and it stopped because the low bobbin thread light came on. So, I wound a new bobbin and found out I didn't know how to make it stop winding a bobbin in the middle when I saw it was taking all the thread left on the spool! So, I found a pretty good match of thread to finish. After that, it went quickly, probably because there was nothing else to go wrong. The slip turned out to be just the right length, and now I think I like the slightly shorter one better, although I didn't think I would. The shorter one pushes it just that much further away from that Mother of the Bride look that I really want to avoid. I think my look has a general tendency to lean toward formal/dressed-up rather than casual anyway, so I try to pay attention to it. I was glad I wore the thin top this afternoon however, as it was really warm in the room, and any jacket would have been too much.

When I got home, 3 nice things had come in the mail. The October Burda WOF magazine, my order from Pam at Sew Exciting Sewing Supplies, and a new knitting bag like my old favorite from the Nature Conservancy. It's not on their website but it's one of their "Join us" gifts. The Holiday Vogue Knitting came at the end of last week too, and there are some very nice things there.
Posted by Liana at 9:01 PM 10 comments: