I was lucky enough to be able to attend a wonderful workshop featuring Kenneth D. King, designer and sewer extraordinaire, in Kearney, Nebraska.  There were 4 sessions over Friday and Saturday, and I think I can safely say everyone there had a fabulous time.

Mardel came and stayed with me before and after the conference, although it was a flying visit, so not long enough.  We had a great time, and my friends Jan and Jane also went to the conference. 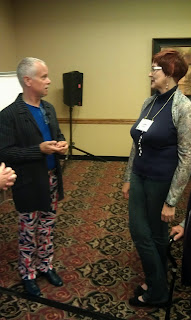 We learned all kinds of cool tricks and interesting things, and I can say that my creativity was sparked in a big way.  It was just what I needed, I think.  The most exciting thing that happened however, was after the official weekend was over.  Kenneth's ride back to Omaha and his flight out the next morning, had to leave early and they needed someone "who would be willing" to take him to Omaha.  Well, THAT was a no-brainer!  Mardel and I immediately volunteered.  An extra hour to Omaha from Lincoln and then back home was more than worth it to have Kenneth King as Our Hostage!  Yes, we had him in the car for 3 hours across the state, and he was just as gracious, funny, fun, charming and personable as he had been the entire weekend.  We had a blast, and we hope he did too.


I have a few photos when he let us try on a few things he had brought.  Talk about feeling like a queen!  Some are a little blurry, but that's life, I guess. This is one of his gorgeous boleros made with the moulage, I believe.  I have photos of another one with a blurry front and a sharper back that I will post soon, along with some other details.  Thanks to Mardel for taking these, and to Jan for taking the ones of Kenneth. 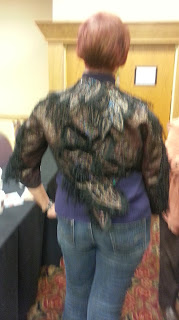 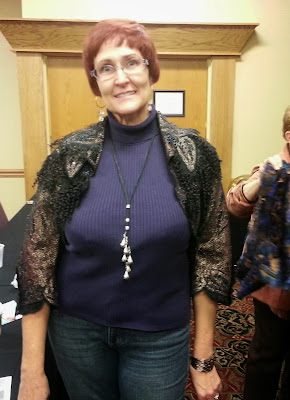