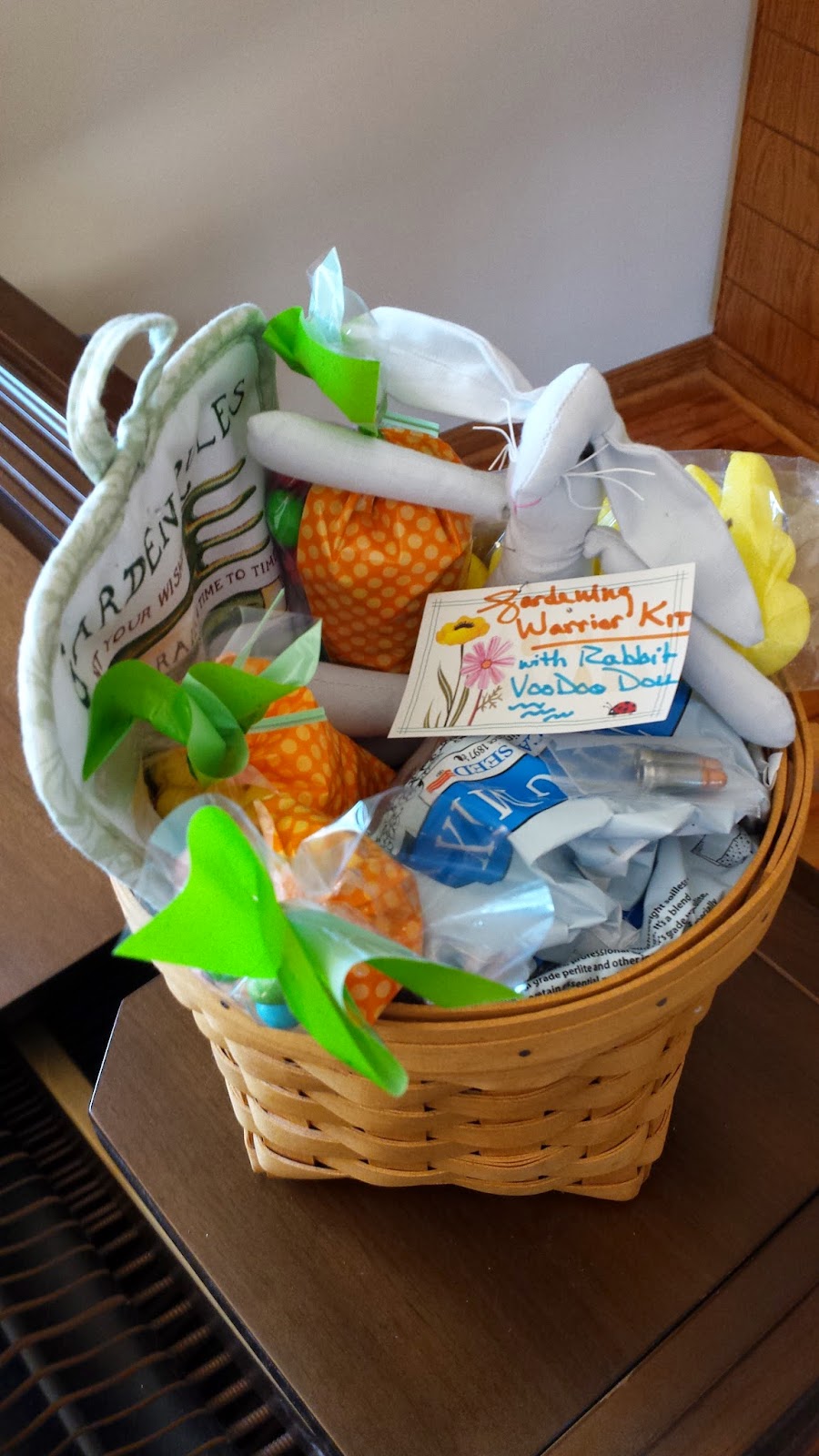 This is a gift basket for a man who is an enthusiastic gardener.   He also has a never ending battle over that garden with rabbits.  It's going to accompany a gift card, and I had a lot of ideas for something cute and kind of funny, so I was elected.  I thought it turned out so cute that I had share.  I hope you think it's cute too. 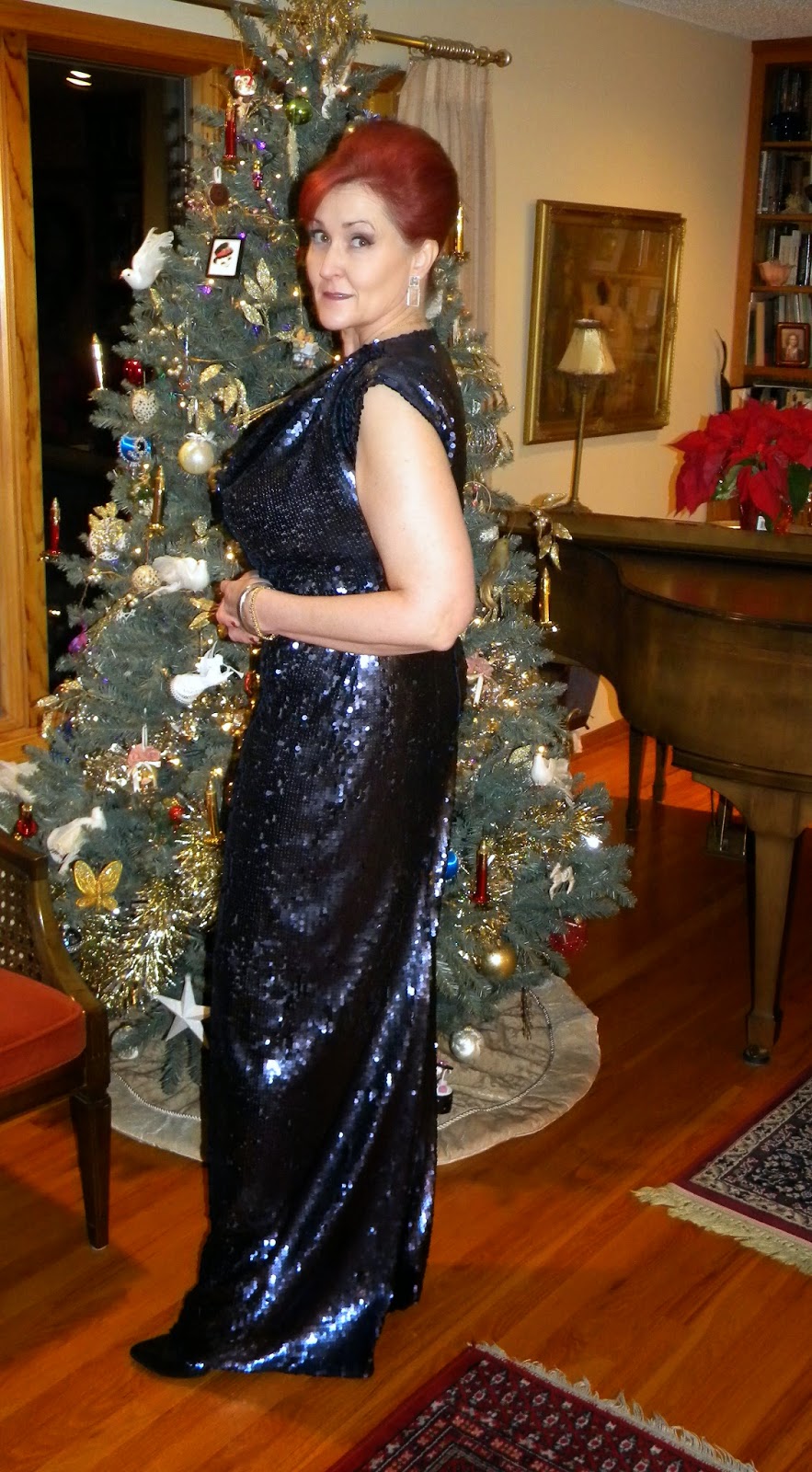 This is my New Year's Eve gown.  I was rather pleased with how it turned out, especially since I didn't cut it out until about 3pm on the 30th.  It was all done but the hem by about 9:30.

This is good old Vogue 1250 lengthened and with a baby train.  Very similar to a tan knit gown I made and have loved.  This is however, the first time I've worked with a sequined fabric.  Nancy and Sharon found this for me in Santa Fe and insisted that it was 'me'.  It was also a fantastic bargain, and I was an easy sell.

I think I was very lucky in the construction of the fabric itself, as it's a 2-way stretch knit (widthwise, which is the usual), and I didn't have a lot of trouble with sequins coming loose when I cut the fabric.  A lot of the information I read talked about taping the cut edges, etc., and I was really hoping I wouldn't have to do that.  I did end up doing almost all of the sewing by hand, with a backstitch.  The end result was much more attractive that way.  The way the sequins were applied, they 'lined up', and I could sew between them, and then  pull them out onto the face of the fabric from the allowances where I needed to.  The holes in the sequins were very near one edge, and so if you happened to stitch through one, or close it into the allowance when it really needed to be on the right side, you'd have a fairly large gap.  You can see that the face is not perfectly even, and so a little variation isn't noticeable, but I didn't want 'bald' seams.

One 'exciting' revelation (to me anyway) was how very uncomfortable sitting in such a gown can be.  I think this is a fabric which is made for standing and just looking decorative.  It's also kind of 'noisy' when you walk.  It's not so heavy when you're wearing it, but there's noticeable weight when you handle it, or put it on or take it off.  I would caution others with a similar plan to watch out.  I kept shoving sequins under a fingernail when I was trying it on, and I actually bled.  Very painful, too.

You can't see much of the train, but there isn't much of a train, really.  That's why it's a baby train.  The top photo especially has the skirt in a strange position at the hem.  It really does hang nicely though, and I think you can see it better in the back view.  It reads mostly as a column, which is my kind of thing anyway.  The 'train' is just a little extra fun, swishiness.

I wore this for a New Year's Eve party, and will wear it again Saturday for another.  I'm sure it will be a handy thing to be able to pull out of my wardrobe.  The color, a very dark navy which sometimes seems to aim toward purple and sometimes toward gunmetal, will be appropriate for any number of occasions, I think.