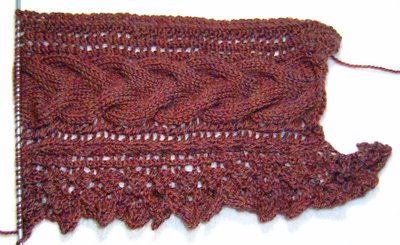 Here's what I've been knitting the last couple of days. I finally started on the Lace Wrap from Vogue Knitting, Holiday 2005. What a fun pattern, but I was going crazy doing it until I made myself a nice chart. 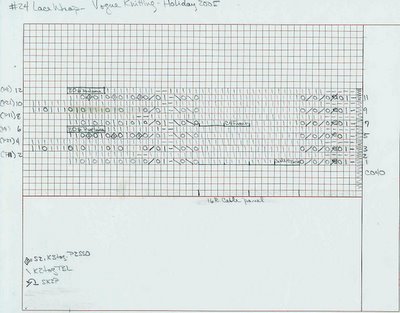 They had it written out line by line, but each line of printing just started wherever the last one ended, and it was maddening to try to make sure you were in the right place. The pattern makes much more sense this way too, as you can see how the designs stack up. The top of the wrap in the photo is actually the right side of the chart. The pointed edge will be the ruffle at the bottom. That's why it's purposefully wider than the rest of the wrap, and you can see that the left side of the chart varies in length of rows. This is what makes the points. I like this yarn a lot too. It's from Elann, and is their Peruvian Collection Highland Wool. It's very nice to knit with. Here's a close up of the yarn that's a little more true to color. 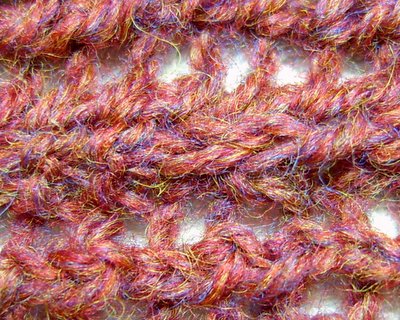 It seems to go pretty fast, which is nice, and it's certainly an interesting pattern to knit.

I finished my caramel wool pants and knit top before Christmas, and they're very nice. I just don't have a photo yet, and may not until after the end of the year, as I'm trying desperately to finish up all the bookwork, etc. before the 1st. It's always a mad rush around here in the week after Christmas.
Posted by Liana at 12:30 AM 1 comment:

I bought some fabric at Sew Creative the other day; a lovely caramel colored wool, and a rayon/lycra fine ribknit in a slightly darker shade of the same color. The knit seemed to have slight color variations across the grain, so I bought a small amount, and prewashed it, and it came out beautifully even. It will be a Jalie Tee, and I have since bought a little more, which will be a matching skirt.

I cut out a pair of my Double Burda pants tonight from the wool, applied the pocket and zipper, and sewed the in- and out-seams. It is so lovely to work with, and just does everything I would like it to, instead of fighting me every step of the way, or at least sabotaging me a little. I will finish them tomorrow, I hope.

I also got a pattern today that I ordered only 3 days ago. It's the 1951 French Couturier (Patou) Suitdress from Decades of Style. In their very nice email telling me that it had shipped, they also mentioned that this was their most advanced pattern, and that if I had any questions of problems, not to hesitate to call or email them. That gave me pause, and when I looked at the directions this morning, I could see why it's difficult. It just has lots of tricky things, and lots of shaping, including the curved back peplum, which is so lovely, but is going to be exciting to make, in a lot of ways. I plan to do the view with the drape that comes from under the peplum. I'm not sure when I will be able to start on this, but probably not until sometime in late January or later.
Posted by Liana at 1:54 AM No comments:

Well, I've been making some pants. I love my Double Burda pattern, but wanted to add a pocket, preferably an inseam pocket.

I've always liked the one used on the Great Copy Classic Pants, and so I used it, correcting the side seam shape to match this pattern. I think it turned out pretty well. I only put one on the right, as the zipper is on the left, and it would add quite a lot of bulk there to add a pocket too. I've been buying fabric for pants for quite a while in the certain knowledge that I would be needing and making pants again in the near future. Well, maybe not quite as near as I'd thought, but still, one always needs pants.

I'm fairly pleased with these, and I like the new waistband treatment I tried. It's detailed on this page of Pam's Off the Cuffwebsite. She calls it The Comfy Waistband, and it is very comfortable. I did it with a zipper and darts, so not nearly as much gathering as she is getting with a regular cut-on elastic pants treatment, but still a little bit, and it gives a really nice, smooth look. Almost what I've seen described as a Hollywood waist pant, and it does give that long look.

The dark green pair I made first actually have a lowered waist, and I like them very much too. They're dark enough that photos don't really work too well , except the pocket close up.

I plan to make these again in more wintry fabrications. I have a very nice light-cognac wool, with a matching rayon/lycra knit for a Tee, which will probably be next.
Posted by Liana at 11:29 AM 2 comments: 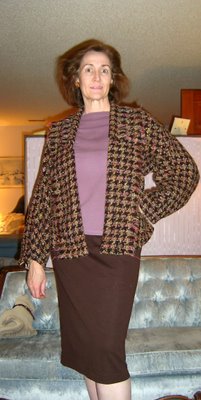 I decided that I wanted to wear this jacket for a music club luncheon on Thursday that I will sing at. So, thought I'd better get with it, and was very pleased to find that it was almost as quick as the fleece version. This is the Chocolate/Multi Bouclé from EmmaOneSock.

I'm very glad I waited to make this until after I made a "muslin" in fleece. If nothing else, it gave me a chance to look at my layout once again before cutting, and I decided that the other selvedge was prettier, so I moved it all to the other side. This is cut with a crosswise fold in the fabric, so it's an unusual layout. I have a strip about 15" wide left along the smaller selvedge, the whole length of the fabric. Now, to think if I should do something with it. Maybe just a scarf or narrowish shawl?

The seams had to be finished, naturally, as the bouclé is very ravelly. The pattern calls for topstitching through the folded seam allowances on all seams, but I didn't think that would really do it on this. So, I used rayon seam binding to cover the SAs, and edgestitched it on both sides. This made for double topstitching on all seams, but it seems to work fine. I also did more staystitching than they call for; along the horizontal seam between the upper and lower back pieces, which in the fleece seemed to want to stretch out a little. Between the staystitching and the double topstitching on the seam binding, I think on the bouclé, this seam is very solid. 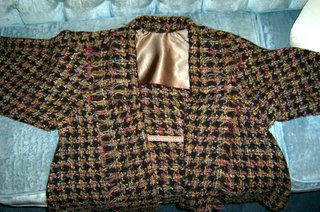 I added a collar to this version, which I think closes up the neckline nicely. I had thought a stand-up type collar would be very cute, but I wanted to use the selvedge fringe, which is so outstanding on this fabric, and it would have looked very strange in a stand-up collar.

I used a medium-to-heavyweight lining fabric for the back facing and the sleeve facings, and I think it makes it very nice to wear, as it slides on easily, and feels rather luxurious. It also saved a lot of bulk right at the shoulder seam.

I was surprised at how quickly this pattern goes together, but since there is no lining, and I didn't fuse anything except the facings, it really only took me a little over a day.
Posted by Liana at 9:55 AM 2 comments: 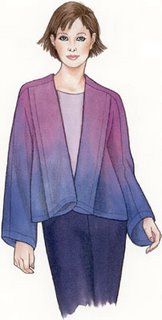 I decided that the Sewing Workshop Haiku Two pattern is what I want to use with the EmmaOneSock chocolate/multi bouclé. I will use the gorgeous selvedges for the lapel edges. I spent Wednesday evening checking the pattern for size, etc. and finally did a tissue fitting, and was amazed when the XS size appeared to be what I wanted. These patterns are usually very oversized, but really...an XS?!! So, I was loathe to cut my beautiful bouclé without a test. 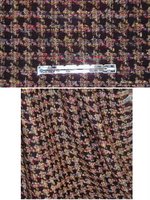 I got out some burgundy fleece that didn't get made up last year, and used it for a "muslin." I think it came out quite well. I will add shoulder pads to the bouclé version, and also a hem, as the wrong side of the hem allowance shows right at the center front on the turnback lapels, and it really looked icky on the fleece, but I think it will be unnoticeable in the bouclé. This is really warm and cuddly in the fleece, and I've been wearing it pretty much since I finished it, as winter has really come with a vengeance around here!
Posted by Liana at 2:37 PM No comments: