Yes, I'm making boxer shorts for Pearle again. I made one pair several years ago, which he promptly told me he didn't care for, and I was not insulted, just happy to have more "me" sewing time. Suddenly he decided he liked them. Of course, I had tossed the pattern at least a year ago. I really wasn't that crazy about the pattern, and now it's no longer available anyway. It was a Vogue pattern, and when I looked, I noticed that NONE of the Big4 currently has a pattern for real boxer shorts. They're all "unisex shorts" which means no fly. Much easier to sew of course, but naturally, it's a no-go around here. I looked on PatternReview, as I knew there was a popular boxer pattern, and ordered the Jalie 2326 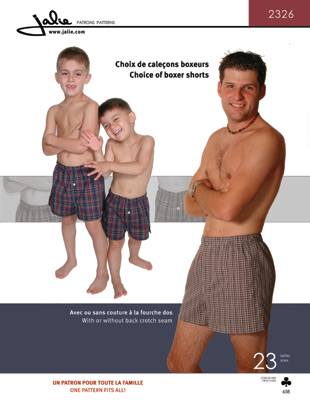 which has good reviews. It has one view with a CB seam, and one without. I did the version without, as per request, and it was really very simple. As I said, no pressure, and it was very relaxing to sew.

I used a cotton lawn fabric from FFC. It's one of the things I got on their sale a couple weeks ago. I ordered 4 different lawn fabrics for shorts, 3 prints and one plain. I might as well enjoy making them. Lawn is not particularly hard wearing, but it's really soft right from the start, which was my criterion.

About half-way through, Pearle mentioned that he wanted a waistband which opened at the front as well as the fly, but after further questioning, I found he just wanted some adjustability and had a preference for a drawstring. I used elastic in the back and up to 2" each side of the side seam on the front, and stitched the drawstring to the ends of the elastic and ran it through a couple buttonholes in the front. I haven't received a verdict yet on these, and I can see a few things that may be changed before I do any more. I did use one of my machine's bartack stitches at the bottom of the fly, and again just above the side vents.

Here's a close up of the fly. In non-men's sewing news, I got in on the big Elliott Berman birthday sale the other day, and now I'm eagerly awaiting my package. I think I was somewhat circumspect, but I have some wonderful things coming!

I'm also waiting for another package from ELingerieA, which should arrive shortly. Then I will be making another bra and maybe some panties to match. I am not planning to make pants to match the first bra since they would be see-through. Not exactly my style.

Thank you all for the encouraging comments on my bra. There were also a couple questions about my bra that I thought I'd try to answer.

Anne asked if it was awfully expensive to order from ELingerieA since they're in Germany. I would have to say that it depends. Their prices translate into dollars very well, and often beat US sources, and they have lovely things. The shipping on my first package was extremely reasonable. I queried the S&H on the second, as it seemed much higher, and they adjusted it so it was very acceptable. So, don't ignore sources without checking. There's a lot of variation.

KarenDee asked if this bra has the same uplifting properties as a RTW bra. I have to say that this particular bra does not, but I know why. The band is stretchier than I thought it would be, and so it's too big around for really good support. The straps should be wider too, but I had these on hand, so I just used them. Other than that, it's pretty good, and if I change the items I've mentioned, I think it will be very good, and at least as good as the bra I've copied. As far as I can tell, the uplift is mainly due to a combination of the band being the correct size (pretty snug) and the cups having enough seaming, and its being in the correct places. I'm sure the 'correct' places are different for everyone and depend on our own shape, so trial and error would seem to be necessary. I'd say get a pattern that's as similar as possible to a bra you like, or trace that bra.
Posted by Liana at 6:02 PM

Fun boxers! I have two boxer patterns-one is Kwik Sew and the other an independent company. Never made them though.

Fun! I just won't tell my husband this pattern is around. We're still refining the dress shirt.

The boxers look great, Liana. I bet Pearle is happy that he doesn't have to go boxer shopping. That cotton lawn fabric sounds so nice and comfortable.
Good job!

Thanks for answering my question about the bra support. Your answer was quite helpful. I love the look of your newest (gold and white) bra; it looks so professional. Hope it is comfortable and wears well.