I Found It! (The Instant Jacket Pattern)

I'm sure most of you have just as much stuff as I do related to our love of needlework of various kinds, and this will be a familiar tale. 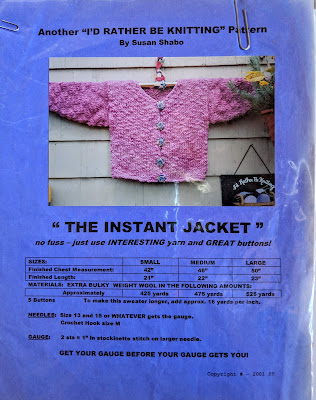 This summer I suddenly decided I needed to make another little knitted cardigan/jacket, and I wanted to use a TNT pattern (Tried and True) that I've made several times before, but it's been probably 10 years since I used this pattern. And so, the pattern hunt began.

This is a photo from 2010 and the only one I can find right now, but you can see why it's just a nice, handy, boxy little cardigan that takes very little yarn.  I'm pretty sure I've made this pattern with a collar as well.  It was a ribbon-y yarn mixture with pink and brown and gold, maybe.  Hmmm, I 'll have to look for that one. 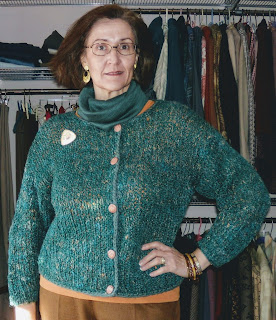 I looked hard for a while, then finally decided that it would show up eventually.  It wasn't really an emergency anyway.  Well, today was the day. I was putting away the few Halloween decorations I have, and found a pile of knitting magazines I had overlooked. At the bottom was a very large 3-ring binder with notes and patterns.  I hardly dared hope it would be there, but TaDa! There it was. Now I need to find the years I thought I had in mind.

I've really been in a knitting, sewing, making, singing mood lately, and it's great.  I hope it lasts.  I think it's the singing that's doing it.
Posted by Liana at 9:56 AM

I'm glad you were able to find the pattern but especially happy that you're singing!

Thank you, Carolyn! Both of those things are great, but yes, the singing is the best.

I love your blog and your work. I am glad that I can get inspiration from your blog.
I hope you will continue to create such good articles.